GLW - Greatest League In The World 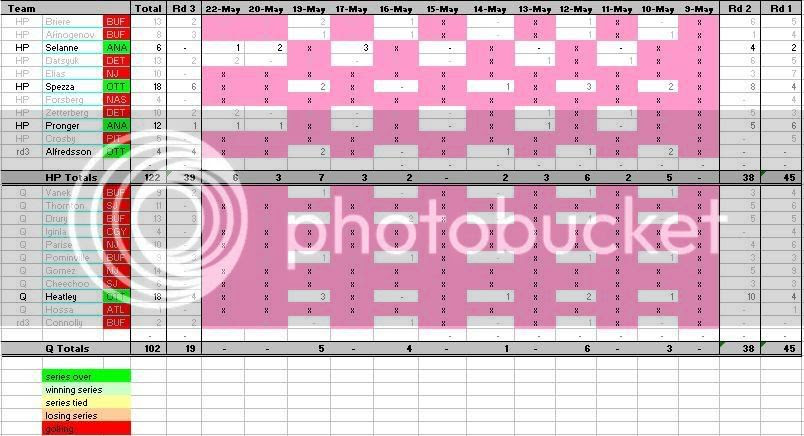 Remember the rules:
1) Strict points, no goalies
2) After each round, each team gets to replace one stiff with a fresh new lively pick. Team that is losing selects first.
3) Winner gets a CD of the loser's choice, pending winner's approval.

Let the best team win (again).
===========================
With a tie after round 1, we made no supplemental picks entering the conference semifinals. After one game complete in each series the cream has risen to the top - no, not the Sabres: Rob's team. Zach Parise continues to impress, even if his team won't be around much longer.

incidentally Hale, I think I'm increasingly getting over my head w/ this Excel spreadsheet - when uploading to google spreadsheets something in the formula for your total points gives you twice the actual amount. Also the individual player/day cells are formatted strangely - not allowing zeroes. But don't bother thinking about it - you should be spending your time figuring out what CD you'll be buying me...

Posted by Ricig at 11:30 AM Labels: fantasy hockey, playoffs

Insights from the 2007 GLW draft:
Our two heroes approached this year with very different strategies. Rob played favorites with (and in) the east with half of his entire team allocated between New Jersey and Buffalo, plus two more picks in the east to solid players on teams unlikely to make it out of the second round (Hossa in Atlanta and Heatley in Ottawa). This reliance on a single conference two teams is a gamble that may generate an insurmountable lead or an insurmountable deficit early into the playoffs.

Hale, meanwhile split his positions evenly between east and west, and across more teams than Rob. This balanced strategy guarantees a middle of the road finish in a large league, but in a two person league such as this it may keep him from shooting himself in the foot. Who will emerge with the glory? Read on...

East
The favorite teams out of the East were clearly Buffalo (5 players selected) and New Jersey (3 players selected). Hale didn't touch the ATL-NYR series believing it to be a toss-up, while Rob wisely and safely selected the highest producer on either club in Marian Hossa. Even if the Rangers pull off the upset, Hossa should still deliver 5-7 points. Rob appears to think Ottawa will advance out of the remaining series against Pittsburgh while Hale hedged by picking one star on each club. Advantage: Rob

West
Rob has only three of ten players in the west, and all of them are on "underdogs." Surprisingly, Rob appears to have the most confidence in the outcome of the Nashville-San Jose series. Equally surprising is the fact that Rob favors the Sharks in this match-up despite the fact they are the road team, and despite how improved Nashville is over last year when this same series went to seven games. This (unbiased) writer believes Rob is taking on a lot of unnecessary risk in the West. Hale meanwhile selected four players on the top two seeds of Anaheim and Detroit, and used the last pick on the much improved Nashville Predator's center Peter Forsberg. Advantage: Hale

Spotlight on...
Last year the fate of the Sabres decided the champion of the GLW. This year the spotlight is on three first round series wherein Rob and Hale have allocated their picks in opposite directions. Hale is banking on Nashville, Detroit, and Anaheim, where Rob is pulling for San Jose, Calgary, and Minnesota (Rob has no players on Minnesota, but should the Wild win Hale would have both if his Anaheim players knocked out in the first round). In all other series are allocated more or less evenly, so the outcome of these three series will have a major impact on the standings in future rounds.

Summary
What can we infer from the draft strategies employed here? Rob doesn't have a lot of confidence in any of the favorites in the west --not even the top two seeds. Rob also really, really, likes the Sabres. And while a conservative and cautious fellow in person (you just want to hug him), in a hockey draft Rob shows the aggressiveness and risk-tolerance of a bullfighter. He throws his full weight behind a small number of picks, and he's not afraid of picking and an underdog. Rob also picked two players on San Jose. This is a huge risk pick because the series between the Sharks and Predators is essentially a toss-up. The Sharks performance on the road will be the difference maker in this series.

Hale prefers a conservative strategy by diversifying his picks as much as possible between the east and west, and across more teams than Rob. Is Hale scared or smart? The answer is both -- in his heart of hearts he believes the Sabres are the most likely to challenge for the cup this year which makes Rob's weight on Sabres intimidating. On the other hand, anything can and has happened in the NHL playoffs which makes an over-reliance on a single team impossible to overcome in the event of an upset. The supplemental draft after each round allows for a little wiggle room too.

Bottom Line: in a normal league Rob would have the greatest likelihood of taking the crown or finishing in the cellar, but in a small league like the GLW a more diversified approach should prevail... pending of course the outcomes of the three "spotlight" series (NSH-SJ, ANA-MIN, and DET-CAL).

If you wanted to take your reporting to the next level, you should "x" out the games in ADVANCE of the games played that day -- so fans can see how many skaters each team is rolling out.

as if i have all the time in the world to x-out all thos.....yeah, ok, i'll do it first thing in the morning.


Cheechoo "extremely doubtful" for game 2. That's what they kept saying about Tim Connolly last year, too...

update Wednesday Apr 18: Does Atlanta suck or what? Hey, it couldn't happen to a better guy than Keith Tkachuk - I failed to take his poison into account when predicting this series. Anyways, Hossa The Floater will likely be the first dead man in the 2007 GLW tonight. Hale opens up an 8 point lead on a light night for the teams. Jarome Iginla and the Flames finally showed some sack and proved their worth last night. Tonight Rob has 8 skaters, Hale 4. Looking to close the gap a bit (but wouldn't mind Hale's Sabres piling up some points tonight either....)


update Tuesday Apr 17: Hale has opened up a nice lead, although the first round means very little in this pool...er, league. Looking at Hale's team, the initial selections of Sidney Crosby and Jason Spezza was a complete hedging-your-bets deal, but it is paying off. Ottawa has been the better team but Crosby is putting up a nice showing on the scoreboard. He's likely to lose his 2 Anaheim players for at least a week after tonight as they polish off Minnesota. Other than that all of his skaters look to have at least a few more games in the first round to generate points. Rob's faith in Calgary is shaken as they've been somewhere south of horrible thus far. Buffalo has not showed the form that led them to first place but as long as they advance he'll be in good shape. Marian Hossa is doing his best Alexei Yashin imitation thus far; though I'll admit to shedding no tears if Atlanta craps out in four.

MONSTER night for Rob. Had virtually all of his skaters and even the now-dead Marian Hossa managed to throw in an o-by-the-way assist. Thanks for coming Atlanta. 12 points for Rob, 1 for Hale - leading to Rob's first lead of the season. Tonight is heavily weighted back towards Hale as he has 6 skaters - 2 each from Detroit and Anaheim with Crosby and Spezza from PIT and OTT. If Ottawa wins tonight Crosby dies and Spezza is frozen until round 2...

Rob up by 5 but still quite meaningless as he's about to lose a few Devils with the Sens up 3-1. If Buffalo fails we'll have a lot of red spaces with 5 Sabres in this year's GLW. If Detroit wins the series against SJ, Rob needs to start finding an album to buy...

Monday: uh oh. Unless San Jose pulls this out it could be a romp for Team Hale as he will have 7 skaters remaining to Rob's 4. Saturday's explosion by Datsyuk and Zetterberg propelled not only the Wings to victory but Hale into a virtual tie in the GLW. I'm still far from convinced that Joe Thornton is anywhere near worthy of a league-MVP, large point totals be damned. He'd better be at his best tonight or I'll be shopping for the latest Dokken album to present to Hale.

what started as the Greatest League in the World will end as the Greatest blowout in fourth-round-history unless the Sabres can win four straight. Hale's 8 players to 5 advantage coupled with Buffalo's realization that they've been playing their powerplays holding their sticks upside-down is going to leave Rob with one player in the final round to Hale's 6.

It's time for me to identify a few CDs - this is the "win-win" part of the GLW (but in a more accurate way, Hale is the winner)

after an outstanding race in the first two rounds - both teams ending in a tie after each - Hale ran away in the 3rd round as he had a well-balanced attack while all of Rob's (road) apples were in the BUF/OTT series, and most of those on the LOSER side. shizer.

Hale outscored Q 39 to 19 in this round and with 4 players advancing to Rob's 1, even the greatest performance in the history of hockey won't save Q from defeat.


So although the formality of picks will be pursued - I'll take Ryan Getzlaf just because - The Greatest GLW Champion in the History of...the World will go down in defeat.