Last week I was interviewed by Stephen Watson of the Buffalo News for an article on how technology is bringing fans closer to their team - nice to see that Road Apples made today's front page in TBN (even though there was no link...). Kevin at BfloBlog.com was responsible for this blog getting noticed so a big thanks goes out to him as well as to Mr. Watson for the very enjoyable interview and subsequent article.

update: since the article is no longer online, here are links to the article in jpeg form (obviously, click for the full-sized page): 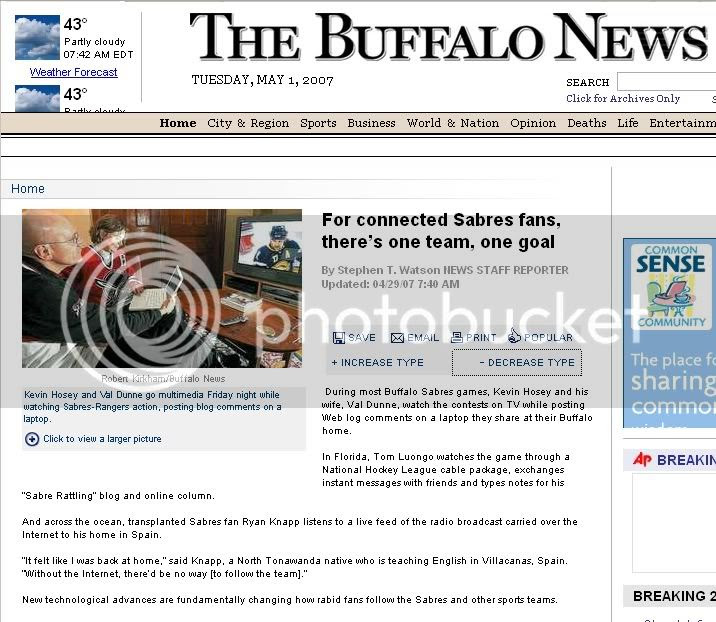 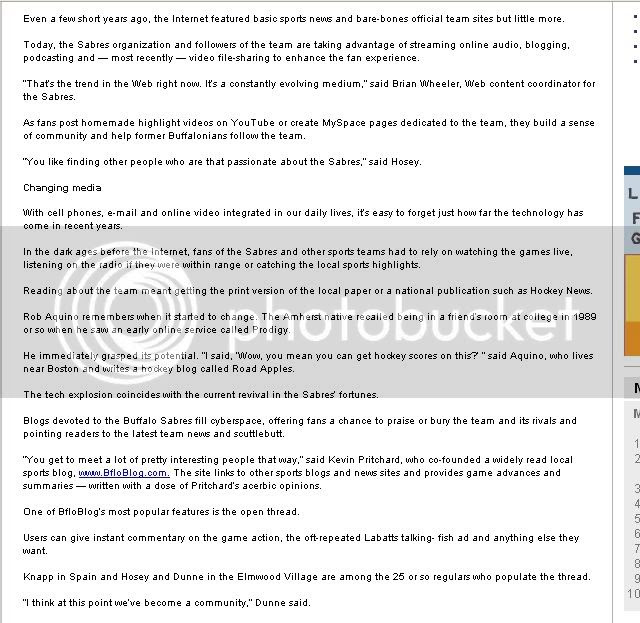 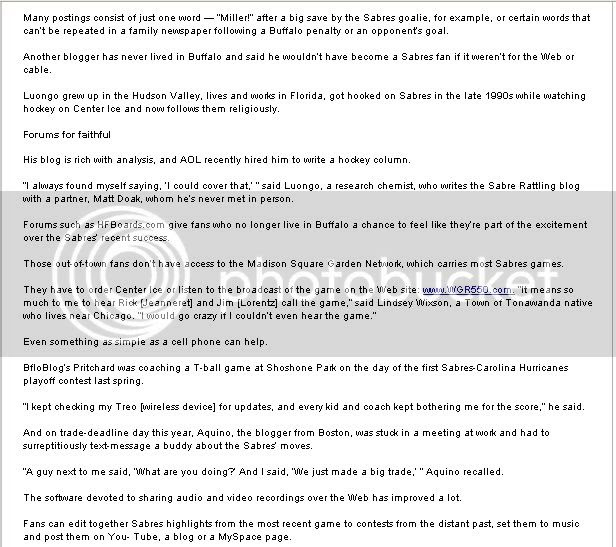 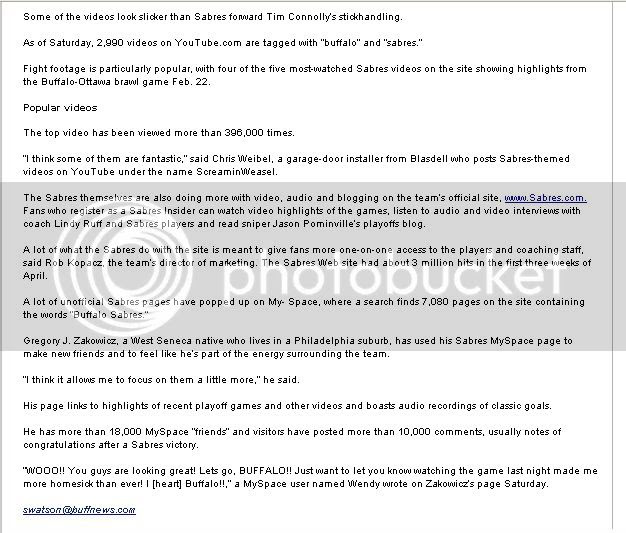 
...thanks again to Mr. Udo for those deadline-day updates. :)

Just read the article in the Buffalo News and because of it was directed to this site. I moved to Boston from Buffalo last summer, and I am still in the habit of reading the Buffalo News before the Boston Globe. Is there any place in the Boston area that Sabre fans get together to watch the games? My Center Ice hockey package is nice, but when we get to the final round, I really would like to enjoy it with my own kind. By the way - even some of the 'Bruins fans are pulling for the Sabres to win it all....
Linda N.

Hey Linda -
years ago when I was a bit closer to the city itself (read: T accessible) I used to catch a lot of the Bills games at The Fours and then (I think) Bell In Hand...(?) I honestly don't know if there's a Sabres following at either place but now that you mention it I'd be surprised if there weren't. Last year on the afternoon of the fated Game 7 vs. Carolina I was wearing an old-school Sabres shirt - while randomly walking for lunch a woman was flying by on her bike and screamed out "Let's Go Buffaloooo!" - I'm guessing she and I aren't the only "ex-pats" around here.

...I'd join you if (I like your optimism - WHEN) they make it to the Finals but I've already planned on being in Buffalo for the final buzzer...*ahem*. I have to be there for the second burning of the city.

Hey Rob,
Just found out the the Bills Backers of Boston are apparently meeting at the Sports Depot, 353 Cambridge Street in Allston to watch the Sabres games. I guess that means I have to find out where Allston is! :) I just started a new job (read "no vacation time"), so there will be no Party in the Plaza for me. I had seasons tickets for many years, and of course had to give them up and move out of town just as the Sabres are on the brink. I did get to see the February 1st Sabres/Bruins at the Garden, and half the place was filled with Sabres fans. By the way, as I was getting on the T on friday afternoon, two guys in Sabres jerseys were getting off. I said "5 down, 11 to go" and they gave me a whoop and a high five and went on their way. Sabres fans are, apparently, everywhere!
Let's Go Buffalo!

Loved the article, Rob, and love the comments from ex-pat "linda".......
freaking Rangers today......but more maddening were the NBC announcers.....after regulation they interview that thug Avery and ask him "how is the team going to cope with the calls the Rangers are getting?"....pricks......I hate NY teams, each and every one of them.....

Although it has been a while, I've watched many a game at the Sports Depot in the past - no shortage of screens there. My funniest moment was in '93, 2nd round against the Habs - game 1 went to OT (as did I believe three did in that round) and after the Canadiens won it I was so distracted and bummed that I walked out and began to drive home....after completely forgetting to pay my bill.

I drove back and had to knock at the door (they were closed) to profusely apologize and settle up (they were very cool about it. Probably because I left an enormous tip...).