calling out The Captain...

(note: apologies for the ranting-aspect of this post. I tried to spend all day yesterday flushing all hockey knowledge from my brain and so catching up on ranting emails and websites about the Sabres/Sens series this morning has me back in a bad mood. Oh yeah - Happy Mothers Day!) 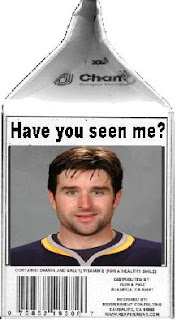 Co-captain Daniel Briere has been called out at length this post-season; he's taken some cheap-shots in the media in my opinion. But nobody ever calls out the other captain, "Mr. Clutch" Chris Drury. He has been a non-factor in the first two games against the Senators, but all the Versus broadcast team can bring themselves to do late in the game is declare that this is "his time" or some such nonsense.

Drury is an outstanding and highly valuable player - as a Sabres fan I love having him on the team. Yet he is somehow blessed with getting the Derek Jeter treatment by the media and fans - potentially overstating positive contributions while ignoring failures. When this player has a bad game, and especially in the postseason, instead of focusing on that very fact and perhaps pointing out some specifics instead in late-game situations tired bromides are spewed forth about how every team should be lucky enough to have a player like Drury to lean on in tough times.

Is it so hard to actually critique a good player? How about something simple and obvious - things like...lack of strong forecheck / poor puck pursuit. missed defensive assignments in his own zone. Even an admittedly deceiving stat like shots taken - he only took 3 in four+ periods during game 2 - can at least begin to paint a picture here.


I'm not trying to be anti-Drury. It just galls me to see Briere take a whole host of shit that Drury doesn't get.

game 3 tonight in Ottawa, 7pm EDT. Sabres look to find some semblance of quality special teams play at either end of the rink, or the dream is dead.